The Royal Yacht Squadron - A History

The Yacht Club, as the Squadron was first known, was founded at the Thatched House Tavern in St James’s, London, on the 1st of June 1815. The qualification entitling a gentleman to become a member was the ownership of a vessel not under 10 tons. Today this is interpreted as a gentleman “actively interested in yachting”. A plain white burgee graced the masthead of members’ yachts; they also wore a plain white ensign with the union in the canton. In 1821 this was changed to a red burgee and ensign.

The Earl of Yarborough, later first Commodore of the Yacht Club, welcomed the Prince Regent as a member in 1817. In 1820, when the Prince Regent became George IV, Royal was added to the club’s name. The Club’s association with the Royal Navy began early and Nelson’s Captain at Trafalgar, Admiral Sir Thomas Hardy, was among early Honorary Naval members.

In 1826, the Club took to organising yacht racing as a principal feature of the annual regatta at Cowes. In 1828, the rule requiring a yacht on the port tack to give way to another on starboard was introduced.

During the 1840’s, in response to the formation of other yacht clubs, races open to non-RYS yachts were also introduced.

The spirit of invention induced by competition led to yachts “of such celerity in sailing and beauty of construction” that they were of utility to the Royal Navy. In 1829 the Admiralty issued a warrant to wear what is now the Navy’s white ensign. The burgee, in compliment, is differenced with a St George’s cross and crown. Lord Yarborough’s Falcon led a rally to Cherbourg in 1831. In 1833 the Club became the Royal Yacht Squadron by command of His Majesty King William IV.

Lord Wilton’s time as Commodore was full of incident and achievement. World-wide cruising continued to flourish. Ben Boyd, in his schooner Wanderer, visited the Solomon Islands and was devoured by cannibals. In the same year, 1851, Commodore Stevens, visiting the Great Exhibition, challenged for the Squadron’s £100 Cup for a race around the Island. America’s victory was witnessed by Queen Victoria and the Prince of Wales, later Commodore and Edward VII.

The Marquess of Anglesea was so surprised at America’s speed that he thought she must have had a propeller. Deerhound RYS witnessed the sea fight between Kearsarge and Alabama. Gazelle RYS rescued the Empress Eugenie at the end of the Franco Prussian War and Squadron yachts took succour to the troops in the Crimea. Lord Brassey’s Sunbeam logged 37,000 nautical miles girdling the earth. 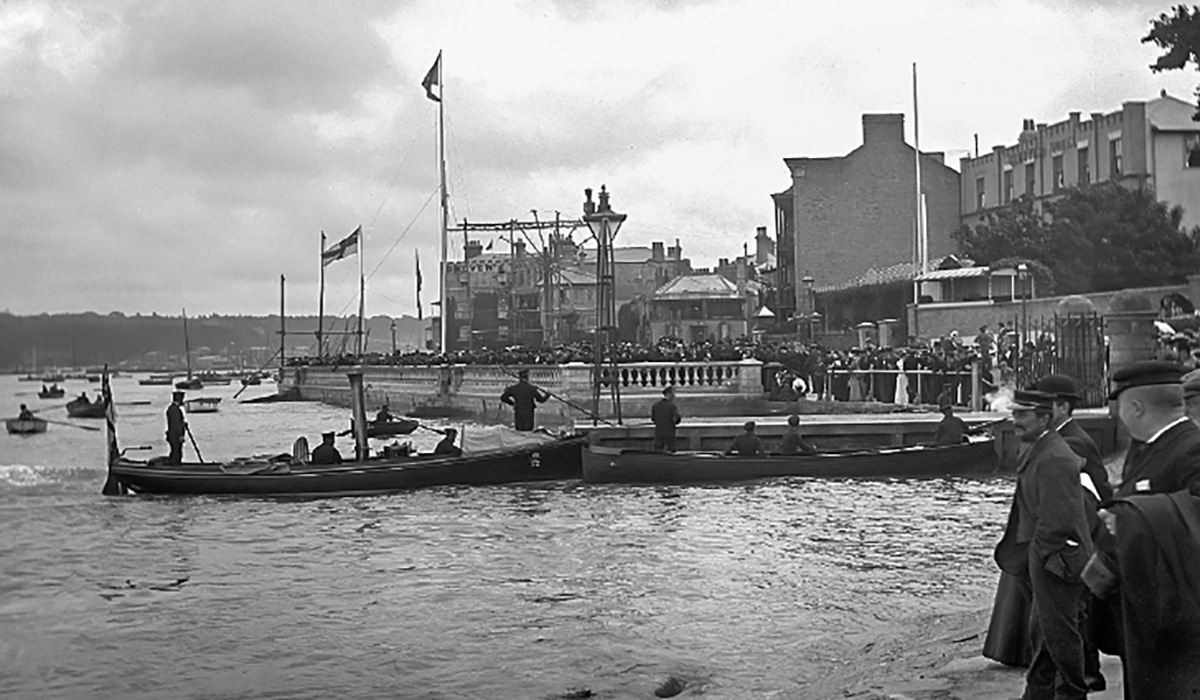 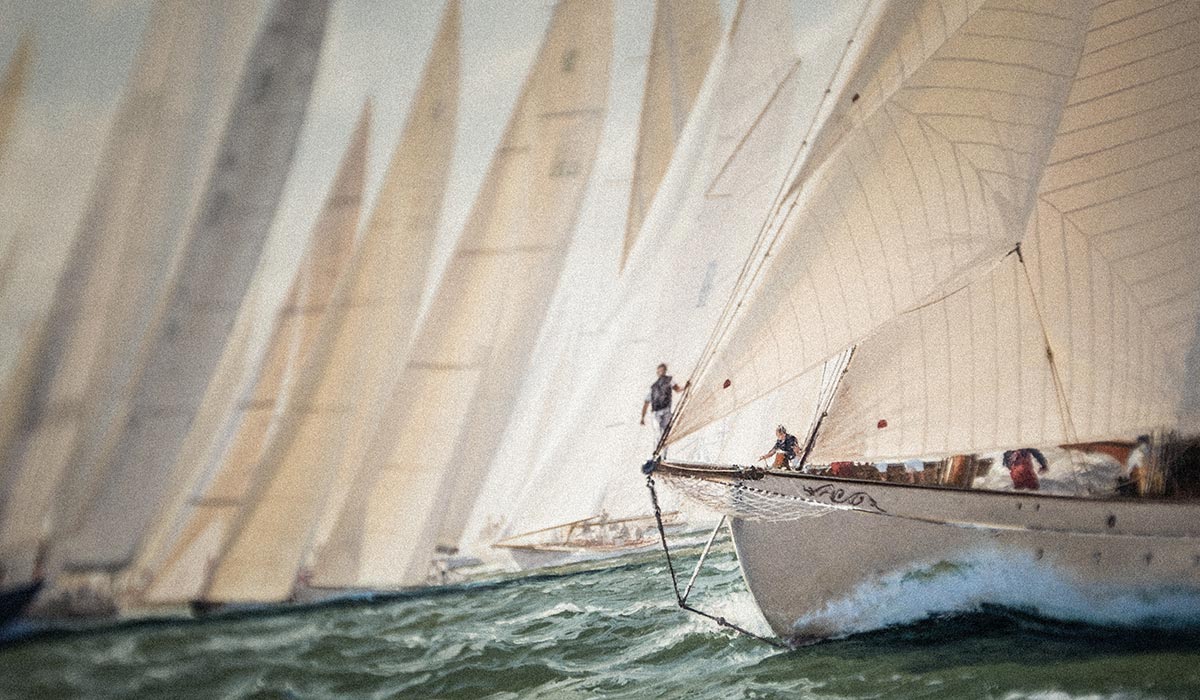 The Golden Age of Cowes was heralded by the election of the Prince of Wales as Commodore. There had been a chapter of disagreement between the newly fledged YRA, the Squadron and other old established clubs over racing rules. The YRA seemed to favour the racing machine, while the Squadron felt that cruising yachts should still have a look in.

The Prince would not tolerate further dissension and peace of a sort was in the air. The Squadron was not only forwarding new ideas to the YRA, but successfully beating all comers under the new rule with Sleuthhound, to be followed by the legendary and remodelled Bloodhound, whose mast is now the Squadron’s flag staff.

The German Emperor brought his Meteor, the 1887 ex America’s Cup challenger Thistle, to Cowes in 1892. This encouraged the Prince of Wales to build Britannia, one of the most successful racing yachts in the calendar. Lord Crawford’s beautiful ship rigged yacht Valhalla cruised far afield and was a noted visitor in Cowes Week; she was also a competitor in the 1905 Transatlantic Race for the German Emperor’s Cup. Her owner, a member with a keen interest in astronomy, had sailed to Mauritius to observe the transit of Venus.

During dinner in the Castle one night, Lord Crawford pointed to a star, observing that one day it may run into the earth. “If it does”, Sir Hercules Langrishe replied, “I hope we will be on the starboard tack”. World War I broke out inconsiderately during Cowes Week in 1914; both Squadron yachts and yachtsmen were to play their part in that conflict.

After the war, the ladies arrived. They had been entertained before in the “Deer Park”, as the lawn was named in their honour, but it was not until the Squadron secured the ballroom below Castle Rock (now the Royal Corinthian Yacht Club) from Rosa Lewis of Cavendish Hotel fame, that they had a roof of their own. The Six Metres became popular after the First War, encouraged by the British American Cup.

The popularity of the smaller racing boat owes much to two members, Sir Ralph Gore and Sir Kenneth Preston. However, the focus was still on the big class and the public flocked to Cowes to see the J’s – Britannia, Shamrock V and later Endeavour I, thunder past the Green. Tom Sopwith, with the first of his Endeavours, came as near as the Squadron has ever done so far in winning back the “Auld Mug” as the America’s Cup is affectionately known.

Sir Philip Hunloke was the first President of the newly formed Ocean Racing Club and, with Sir Ralph Gore, encouraged the Fastnet Race, first won by Jolie Brise in 1925. The Second World War saw the RYS Castle as part of HMS Vectis and head-quarters of ‘J’ Force. After the War, at the suggestion of Peter Scott, King George VI presented the Britannia Cup, one of the most celebrated races of Cowes Week. 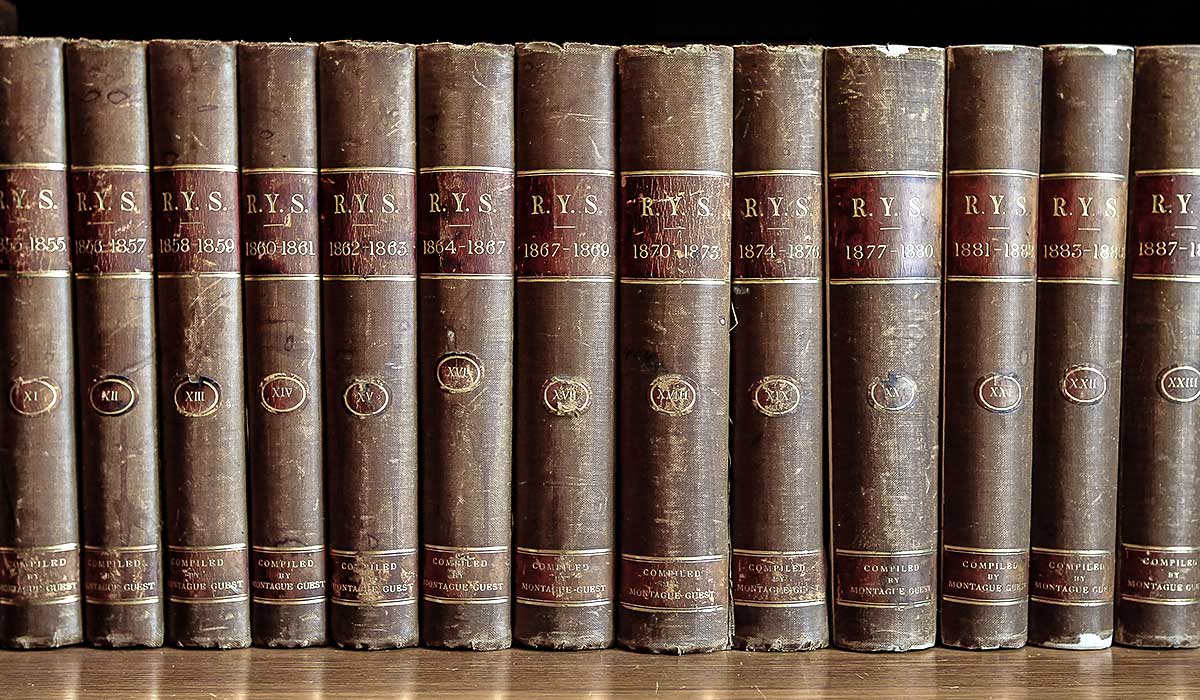 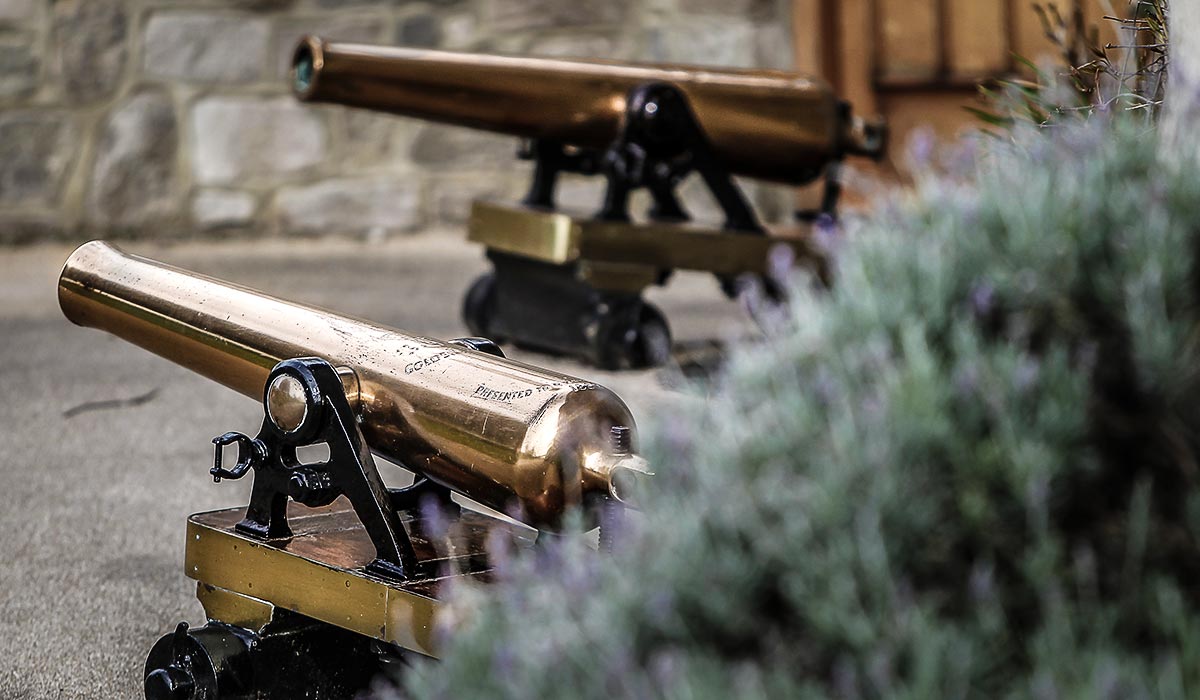 The decade following the end of the War was called the “age of austerity and reverse sheer”. Neither were good looking. However, Bluebottle, the Dragon owned by the Duke and Duchess of Edinburgh, gave small boat racing a kick start. Speed was becoming acceptable too, and Peter du Cane with Vospers was a pioneer. Tommy Sopwith won the first off-shore power boat race to Torquay in 1961.

The moving spirit behind this and the Boat Show was Max Aitken. In 1957, Hugh Goodson, who helped to found the Sail Training Association, headed the 1958 Squadron challenge for the America’s Cup. Captain Henry Denham and Lord Camrose explored the Mediterranean and the former wrote his remarkable guides. In 1966/67 Sir Francis Chichester sailed on his own round the world, which led to the Chichester Trophy, presented by The Duke of Westminster, and the Whitbread Round the World Race. Sir Owen Aisher produced Yeoman after Yeoman and Ted Heath won the Sydney – Hobart with Morning Cloud in 1969. The Admiral’s Cup enlivened racing at Cowes.

The first Chairman of the Cowes Combined Clubs in 1964 was Lord Runciman. Cowes was changing. Two Commodores, Sir John Nicholson and John Roome, consolidated the Squadron’s position and Sir Maurice Laing gave Cowes the chance, through a Trust, to take over the marina.

The Castle itself was fitted for ladies in the 1960s. The brass hot water cans disappeared in favour of the bedroom basin and the radiator made its appearance. The Pavilion, designed by Sir Thomas Croft, was opened in 2000. This elegant creation provides on shore facilities for yachtsmen and their families while allowing the Castle to retain its ‘Country house’ ambiance.

The Pavilion also enabled the Squadron to cross burgees with the New York Yacht Club in celebration of the 150th Anniversary of the Schooner America’s famous victory of 1851. The latest alteration is the RYS Jubilee Haven which, together with the Cowes Harbour Commission pontoon off the Parade, does much to enliven the scene on the water for the visitor to Cowes.